Newly graduated seniors Asa Thompson and Faith Ziegler represented Stillwater High School Theatre at the regional level by participating in the Discovery Awards, a week-long event presented by Celebrity Attractions and the Tulsa PAC Trust. This was SHS's first time participating in the program and competition.

Thompson and Ziegler were nominated as the top two performers from SHS's presentation of Footloose by professional arts adjudicators who attend HS musical performances of participating high schools in the region. Nominees from participating schools then attended a week-long workshop led by award-winning creatives and competed in a showcase at the Tulsa PAC.

Thompson emerged as a winner of the Discovery Awards and will be the male representative for the region as he continues on to compete in the National High School Musical Theatre Awards, The Jimmy's, in NYC later this month. Ziegler was honored on stage at the end of the Awards for being the most improved performer for the week.

"I am so proud of both of these students," Elizabeth Ziegler, SHS Theatre Teacher says, "I'm happy to see them receive the recognition they deserve for their work." 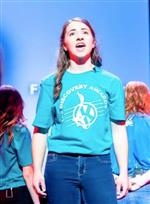 As part of his award, Thompson won an all-expenses paid trip to New York City to spend a week on the Julliard campus learning with 90 high school students from around the country. He and the other nominees will work with Broadway performers, learning music, choreography, and lines. They'll then perform and compete at the Jimmy Awards, the National High School Musical Theatre Awards, on June 27, at the Minskoff Theatre on Broadway, home to Disney's The Lion King.